We have two guinea pigs: Beatrix and Stripe. Both boars and both named by the children. They are remarkably manageable pets and a lot easier and more forgiving than the children. They make a number of different high-pitched noises and a few grumbly ones. As they are herbivores they do a wonderful job of keeping the grass short and finishing left over inner or outer parts of vegetables. Stripe is definitely the dominant one, exerting his alphahood by chattering teeth and shuffling on his hind legs and mounting Beatrix once in a while. Beatrix doesn’t like this, but they get along well enough otherwise. I have discovered that I like looking after animals and the daily routines. It makes me feel connected to nature and grounded.

Recently I discovered that they both had mites. I was disappointed for the sake of the guinea pigs, but also for myself as a task like fixing hurting cavies now requires a huge amount of Robinson Access Memory and can result in a frozen brain screen and needing to reboot.

So several mental Ctrl-Alt-Deletes later I realised that I already had anti-mite shampoo and needed to search the internet for advice on bathing them and scouring their hutch and cage. We have an outdoor hutch with a rain cover, a cage in the shed for wet days or ‘holidays’ and a run for the grass. I broke the job down and managed a bit each day. One day I bought the insect spray. Another I searched for bathing guinea pigs. Another I thoroughly cleaned and disinfected the cage. Today I finally cleaned out and treated the hutch, lining it with just newspaper, and sprayed all the tunnels/toys I intend to keep going forward. I also bathed the guinea pigs and clipped their claws for the first time, which was 96% successful and as our book says guinea pigs can’t die from cutting the blood supply I hope Stripe will forgive me.

Having bathed the boys, we noticed they started behaving differently. Stripe was still on top sociologically, but also literally for a huge percentage of the time. Joe thought this was hilarious. Lily reminded me that two boy guinea pigs can’t have babies so it’s a good thing Beatrix only has a girl’s name (where is she getting this from?)…

I separated them with a bit of cage, and when my husband got home he swiftly came to the conclusion that as they had had their first baths today, they probably couldn’t cope with each other’s smell until they got ‘reacquainted’. Every time we allowed them to mix Stripe was straight to the point, so tonight I am grateful that the hutch divides into an upstairs and a downstairs. Each has all they need and a honey stick to sweeten the deal, and they haven’t complained so far. 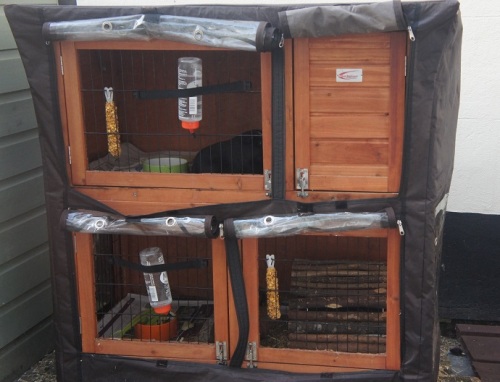 I think Stripe (black with white stripe) is digesting the property pages while Beatrix (agouti?) chills on the ground floor (triple aspect). Hopefully by tomorrow they will be happy to be friends again.

There is something calming about caring for animals, and with depression it is also overwhelmingly satisfying to manage new things like tackling mites and claw-clipping. I will have to keep a close eye on them and clean the hutch again, but I now know I can do it and that it is ok to pace myself.

I have wondered about other pets at times – fish sound interesting and not too hard. They are also very calming if all is going well. We can’t fit a cat or dog in our present property and do justice to them, but maybe in the future we could look into getting a larger pet. I searched online for which breed of dog would suit us best yesterday and every online quiz I tried suggested something different. I would love a tortoise if we could look after it well. And Lily has rather taken to a parakeet on youtube, but that is not going to happen.

Before we had animals we went to the zoo a lot and also other animal parks. Animals can be even more calming if they belong to someone else! Sitting and watching an animal is educational and takes your mind off your problems.

…ask the animals, and they will teach you…

This entry was posted in Adventures in Depression, Guinea Pigs, Joseph, Lily, Me. Bookmark the permalink.