That one’s for dad’s growing collection. I would find a headline made up of gerunds more exciting, if I could remember what one was. Let me check. 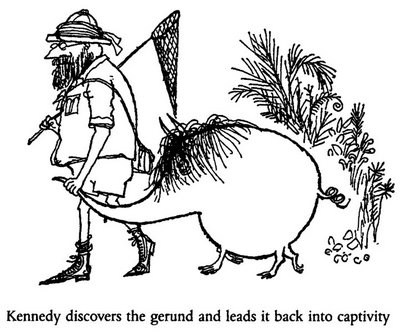 I was on the hunt for gerunds just now and in the process remembered Molesworth, which is well worth a read at least once a year. I must get it out again soon. WIZZ SUPER! Pythagoras as a mater of fact is at the root of all geom.

There is nothing new under the sun. Especially in education, as I see it. Or politics.

I was rather hoping the government might tell me how to avoid dying from swine flu today, just in case it nearly happened. However, there was no post. Let’s just hope I can make it through.

In any case, I am discovering some of the pleasures of nursing, as Lily has contracted chicken pox. She has spots on her limbs and chin and nose and is off her food.  She was not even eating porridge yesterday. Thankfully having me around to see to her every need has brought out the gerund in her and has forced me to cancel several things I might otherwise have found myself doing.

Playing with Lily has increased. The playing of my saxophone has decreased. I would have had a lesson today, but Lily could not leave me, so that didn’t happen. I am actually quite pleased with my recent musical developments. I bought a saxophone 3 years ago (in a bid to stave off a mid-life crisis by seeing it coming), but didn’t get past Book 1 and then went off the teacher a bit and gave up for ages. Since then I decided it may be worth actually paying someone to teach me, and after chatting with a guy at church I found a tutor who took me on in February. In half a term he had got me to Grade 1 standard, and this is the first lesson I have missed. I must do some practice this evening!

Of the planning of many lessons, there is no end. Tomorrow: Inequalities, Solving Equations and Further Graphs.

Unfortunately, tomorrow’s baby clothing exchange at the toddler group is off. Most attempts at clothing Lily are off too. She is too itchy to take on layers without a fight. I would like to order her some more clothing from a catalogue, but she just wants to turn the pages. I don’t blame her.

At least she hasn’t got swine flu. Dad has pointed out to me how hard it must be to learn what is meant by the word ‘pig’ when a toddler hears the word in the context of pigs (real, fictional, anthropomorphic and cartoonised), guinea pigs, piggies (this little…) and as a verb.

Why can’t words just do one thing and keep life simple?

This entry was posted in Baby Lily, College, Dad, Me, School. Bookmark the permalink.